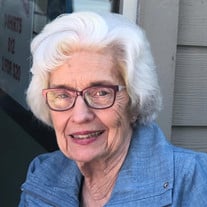 Barbara “Janell” Gause, 83, of Arab, Alabama died April 7, 2021 peacefully in her home. She was born May 27, 1938 in Elk City, Oklahoma to Fred and Geneva Baxter. Janell attended college at Southwestern Oklahoma State University. She enjoyed playing the piano and singing. She married her high school sweatheart Raymond Gause on May 27, 1957. Raymond joined the army and they moved to El Paso Texas while Raymond worked at the nearby White Sands New Mexico Army Ballistic Missile Base. Soon after they moved to Stillwater Oklahoma while Raymond obtained his PHD in physics at Oklahoma State University. Dr. Gause accepted a position as an engineer/physicist for Nasa at the Marshall Space Flight Center, and he and Janell moved to Huntsville Alabama where they raised their two children Shari and Randall Gause. Early on Janell worked at Computer Sciences Incorporated (SCI) and later became a successful real estate agent. She eventually opened her own real estate office called Valley Realty. When Dr. Gause retired from Nasa in 1983, he and Janell moved to a farm in Arab, Alabama where they enjoyed raising and showing paint horses for many years. Janell loved her horses and the many stray animals that would show up at the farm which she would lovingly adopt. Everyone around knew that Janell had a big heart for animals. Eventually they sold the farm in 2003 and moved into town to their family home in which they lived out the remainder of their lives. Janell is survived by her daughter Shari Tice and her husband Keith Tice;her son Randall Gause and his wife Wendy Gause; grandchildren Katie Huffman and her husband John Huffman, Rhett Baxter Gause, Johnathan Trey Gause, Jonathon Kyle Tice and his wife Victoria Tice, Ryan Christopher Tice and his wife Sara Tice; and great-grandchildren Maggie Huffman, and Annie Huffman. Janell will be laid to rest at the Fairlawn Cemetery in Elk City next to her husband Raymond, and her mother and father Fred and Geneva Baxter. Arab Heritage Memorial Chapel and Martin-Dugger Funeral Home in Elk City, Oklahoma have provided the funeral arrangements for the family.

The family of Mrs. Barbara Janell Gause created this Life Tributes page to make it easy to share your memories.

Send flowers to the Gause family.