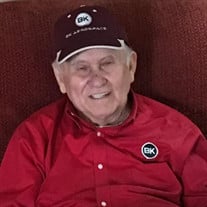 On Sunday, October 4, 2020, Bob Kelley, loving husband, father, and grandfather, passed away peacefully in his home, at the age of 84. He was surrounded by his family and caretakers. Bob was born on July 11, 1936 in Arab, AL to Thomas and Bobbie Kelley. He married Wilma Yvonne Kelley and they raised two children, Rhonda and Brett. Bob was raised in a household with 5 brothers, and helped work on their family farm during his early years. From a young age he was taught the value of hard work. He joined the Army in 1954, at the age of 18, where he proudly served his country from 1954-1956. Bob returned home after his service in the military and began working as a machinist for various companies and organizations including Oak Ridge National Laboratories, Hughes Aircraft, and SPACO. He was a very intelligent, business minded man with a strong work ethic; so naturally he learned the industry and the business rather quickly. Bob had a dream of one day creating and owning his own business that would be able to help support his family and his community for generations. In 1964 he decided to take a risk and create his own machining business, in the basement of his home. A few years later in 1967, B-K Manufacturing, Inc. was officially incorporated. Over the years, he was able to watch his business grow and for his dream to become a reality. To this day BK is still family owned and operated, and is celebrating 53 successful years in business. Bob will be remembered for his strong love for his family, his intelligence, his infectious personality and his hard working spirit. People that knew him know that he was a very serious person at work, but yet he had a great sense of humor and quick wit when he was off the job. When he was not working he could be found tending to his cows, bush hogging and doing work on his tractor, sitting on the front porch telling jokes and funny stories (laughing hysterically), sitting out back eating a watermelon or ice cream as these were his favorites, sleeping in his recliner, and spending time with his family. Bob was preceded in death by his father Tom, his mother Bobbie, four of his brothers: Tom, Tate, Glenn and Clayton. He is survived by his wife Wilma Yvonne Kelley, his two children Rhonda Collins (Charlie) and Brett Kelley (Kim), his three grandchildren Clint Kelley (Alada), Andy Kelley, and Jeremy Collins (Amanda), his three great grandchildren Wade Collins, Carlee Collins, and Leona Collins and his brother Wade Kelley and a host of nieces and nephews A funeral service will be held, Thursday, October 8, 2020 at 2:00 p.m. Arab Heritage Memorial Chapel with Bro. Verlon Willmon and Bro. Tim Nabors Officiating Burial in Brookwood Cemetery, Arab Heritage Memorial Chapel, Directing. Pallbearers escorting Mr. Bob Kelley to his final resting place will be : Clint Kelley, Andy Kelley, Jeremy Collins, Allen Kelley, Jeff Kelley, and Waylon King

On Sunday, October 4, 2020, Bob Kelley, loving husband, father, and grandfather, passed away peacefully in his home, at the age of 84. He was surrounded by his family and caretakers. Bob was born on July 11, 1936 in Arab, AL to Thomas and Bobbie... View Obituary & Service Information

The family of Mr. Bob Kelley created this Life Tributes page to make it easy to share your memories.

Send flowers to the Kelley family.