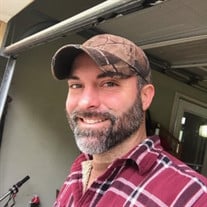 Mr. Cade Laney, age 36, of Morgan City, passed away on Saturday, March 14, 2020 at Marshall Medical Center North in Arab, Alabama. Mr. Laney was born in Huntsville, Alabama on November 26, 1983. After graduating from Arab High School, he joined the Marshall County Sheriff’s Office as a Deputy/ Dispatcher. Cade was a U.S. Air Force Veteran, serving his country in the Iraq War. After returning home, he was employed by SCI – Sanmina as a Quality Control Technician. Cade had many accomplishments throughout his life. His high school faculty selected him as Mr. Arab High School in 2002. He competed in track and field and was ranked 5 th in the 2002 state decathlon. He was selected to the all-county football team and was a state ranked gymnast in his earlier years. He was a member of Sweet Home Baptist Church. Cade is survived by his loving wife, Mary Beth Laney, mother, Cheri Wray Laney, father, Donald Wayne Laney and two brothers, Joshua Laney (Amber) and Cory Laney (Laura), and a host of other family and friends. A visitation will be held from 11:00 a.m. – 2:00 p.m. on Tuesday, March 17, 2020 at the Brindlee Mountain Chapel at Morgan City. Funeral services will follow the visitation at 2:00 p.m. Burial will be at Mount Olive Cemetery at Morgan City with Randy Blakely officiating and a eulogy by his brother Josh Laney. Pallbearers honoring Cade will include: Brandon Hill, Jonathon Scott, Jeremy Maples, Dean Tahacch, Brad Grady, and Cory Laney. Arab Heritage Memorial Chapel & Brindlee Mountain Chapel, directing. In Lieu of Flowers, the Laney Family will accept flowers or donations to the “Wounded Warrior Project*

The family of Mr. Cade Laney created this Life Tributes page to make it easy to share your memories.

Send flowers to the Laney family.