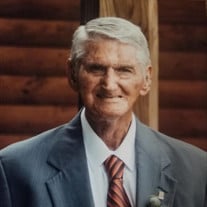 Clyde C Carter, 82, completed his earthly mission and was called home, March 20, 2020. He was born November 13, 1937 in Snead, Alabama, to the late Robert Sylvester and Leta Hill Carter. In addition to his parents, he was preceded in death by his son, Bryan Alan Carter and brother, J B Carter. He is survived by his wife of 57 1⁄2 years, Dorris Sue Walker Carter; son, Darren Carter; special Daughter-in-law, Sherrie Meads Carter; brother, Robert “Bob” Carter; sister, Faye Tessman ( Larry); Grandchildren, Eythan Carter (Sierra), Taylor Carter, and Tyler Carter. Clyde graduated from Fairview High, class of 1956. After Graduation, he served with the US Air Force and loved protecting his country. After serving his country, Clyde married the love of his life, Dorris, on September 4, 1962. Clyde joined the Redstone Federal Credit Union Family, in 1966 and in 1973,while working and starting a family, he obtained a BS degree in Business from Athens College. Clyde continued his career with RFCU and held the position of Vice President of Operations until his retirement in 2005. Clyde was a loyal leader, mentor, and friend to all that knew him during his 39 year career. Clyde was a faithful, loving, husband to Dorris and spent his life serving his bride. He was a loving father, to Darren and Bryan. Whether it was a beach trip, to see the Braves play, or to cheer on the Crimson Tide, Clyde enjoyed spending time with his family! To know Clyde, was to know that he was not only a dad and hero to his boys, he was a father to many. He loved coaching youth football and hauling most of the team to practice. Hearing “Coach Carter...Coach Carter” put a smile on his face and filled his heart. He was also, a spoiling Paw-Paw to Eythan, Taylor, and Tyler. His grandchildren were the pride and joy of his life. There were always kids, laughter, and teaching moments at the Carter house. While Family was important to Clyde, it was his faith that he put first. He was a gentle, kind, humble, and patient man He was always God-fearing, yet loving, Christ -Following, yet serving in every aspect of his life. He was a Christian, not just by words, but through actions. He was a leader, mentor, and Elder at Hebron Church of Christ. His road here on earth was not always smooth but, he always keep on moving. He never allowed the pain of having his son, Bryan, taken from him or his 20 years of multiple cancers, and other sickness, stop him from his faith in God. His faith did not falter. Clyde endured more that anyone would expect in a lifetime. But, he did it humbly, gratefully, thankfully, lovingly, and always letting the light of Christ shine through his every movement. We are all sad to see a man, such as Clyde, leave this earth. But, the life examples and legacy he has left will carry on from generation to generation. Let us be reminded to laugh...to keep living...and most importantly, love others, always. Special thank you to Pallbearers: Eythan Carter, Tyler Carter, Shawn Hester, Ron Decker, Pat Ashmore, and Lynn Hays; Brother Brock Johnson and Hebron Church of Christ, and Arab Heritage Memorial Chapel. Those that wish to remember Clyde in a special way may make a donation in his memory to Hebron Church of Christ, 3382 Hulaco Rd, Joppa, AL 35087.

Clyde C Carter, 82, completed his earthly mission and was called home, March 20, 2020. He was born November 13, 1937 in Snead, Alabama, to the late Robert Sylvester and Leta Hill Carter. In addition to his parents, he was preceded in death... View Obituary & Service Information

The family of Mr. Clyde C Carter created this Life Tributes page to make it easy to share your memories.

Clyde C Carter, 82, completed his earthly mission and was called...

Send flowers to the Carter family.