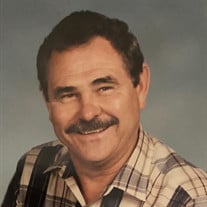 Mr. David Hiram Phillips, age 81, of Union Grove, passed away on Tuesday, March 3, 2020 at his residence. Mr. Phillips was born on April 2, 1938 in Tennessee to the late Harold Phillips & Margaret Louise Burgess Phillips. He served as a General... View Obituary & Service Information

The family of Mr. David Hiram Phillips created this Life Tributes page to make it easy to share your memories.

Send flowers to the Phillips family.