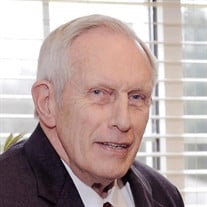 Donald Mead Elrod passed away August 19, 2021, at his home in Arab. He was born on February 12, 1945, in Albertville, Alabama to Irby Lee and Ludie Mead Elrod. He met his wife, Judy, while attending high school and they were married January 22, 1966, and had celebrated 55 years of marriage. Don is survived by his wife, Judy Berry Elrod; a son, Russell and his wife Andrea; two granddaughters, Hensley and Aubrey; his brother Bob and his wife Patricia; sister-in-law, Carol Berry Cole; and several nieces and nephews. He was preceded in death by his beloved son, Chris. He graduated from Arab High School in 1963 and from the University of Alabama in 1967 with a degree in Industrial Management. Don spent his adult life in the trucking industry. He was the co-owner of Arab Cartage and Express until his retirement in 2016. He was a lifetime member of Arab First Baptist Church. Don was a ham radio operator and spent many enjoyable hours on his radio talking to people all over the world. In his travels, he loved to meet in person some of the people he had talked with on his radio. KE4YHY will be missed by many of his ham radio buddies. Visitation will be Saturday, August 21, at Heritage Memorial Funeral Home in Arab. The funeral will be at the Arab First Baptist Church on Sunday, August 22, at 2:00 with the Reverends David Kizziah, Nicky James, and Ben James officiating. He will lie in state at the church from 1:00 until time for the service. Burial will be in Brookwood Cemetery. Pallbearers will be: Ross James, Andrew James, Ben James, Clay Scofield, Jeff Stewart, and Curt Reed. Memorial donations may be made to the Chris Elrod Memorial Scholarship at BancorpSouth. Arab Heritage Memorial Chapel, Directing.

Donald Mead Elrod passed away August 19, 2021, at his home in Arab. He was born on February 12, 1945, in Albertville, Alabama to Irby Lee and Ludie Mead Elrod. He met his wife, Judy, while attending high school and they were married January... View Obituary & Service Information

The family of Mr. Donald Mead Elrod created this Life Tributes page to make it easy to share your memories.

Send flowers to the Elrod family.