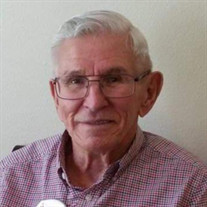 Doug Johnson, former resident of Columbia, Tennessee, and longtime resident of Union Grove, Alabama, died Dec. 22 of Covid-19. He was 88. Mr. Johnson settled in Huntsville, Alabama, at the end of an Army career. His 21 years in the Army included a wartime tour in Vietnam as well as postings in Iran and Germany. He often ran motor pools, repaired vehicles and taught others to do the same. After retiring with the rank of master sergeant, he used the same skills to manage work for civilian contractors at Redstone Arsenal in Huntsville, Alabama. In recent years, he lived at Bridgewood Gardens in Albertville. Douglas Allen Johnson was born July 16, 1932, in Columbia, Tennessee. His mother died in 1945, and his family struggled at times to make ends meet. But he revered his father and stepmother and told stories of a happy childhood with two brothers and a sister. He married Doris Jean Hughes, also of Columbia, and entered the Army. He had three daughters; two were born in the Panama Canal Zone and a third was born in Columbia, Tennessee while he was away in Iran. The whole family was living in Germany when Mr. Johnson received his orders for Vietnam. The family later lived in Kansas until Mrs. Johnson received a terminal cancer diagnosis. The Army granted Mr. Johnson a transfer to Huntsville in 1972 to be closer to family in Tennessee. Mrs. Johnson died in 1973. In 1974, Mr. Johnson married Gloria Fleming, who also was from Columbia, Tennessee, and the widow of a close friend of Mr. Johnson. Each partner had three children, all but one of whom moved into a new joint household in Sherwood Park in Huntsville. As their children grew up, married and started their own families, family Christmases and other reunions became huge affairs. The Johnsons settled near Union Grove on a large lot with a catfish pond. Mr. Johnson loved showing grandchildren the frenzied fish at feeding time and serving fried catfish. After retiring from contracting work, Mr. Johnson remained active as a mechanic and co-founded a repair shop. In 2014, the Johnsons moved to Bridgewood Gardens. Gloria Johnson passed away in March 2015. Survivors include five children; JoCasta Farmer (Wayne) of Atlanta; Tammy Johnson of Hartselle, Alabama; Janet Marsh (Joe) of La Vergne, Tennessee; Joseph Fleming (Barbara) of Huntsville; and Scott Fleming (Sherry) of Albertville. Mr. Johnson’s second daughter, Aline Simpson, died of ALS in 2018. He also had a special friend and companion at Bridgewood Gardens, Margie Thrash. Mr. Johnson had 15 grandchildren and 23 great-grandchildren. No funeral will be held at this time due to the increase of Covid-19 outbreaks. A celebration of life will be held at Arab Heritage Memorial Chapel at a later date.

Doug Johnson, former resident of Columbia, Tennessee, and longtime resident of Union Grove, Alabama, died Dec. 22 of Covid-19. He was 88. Mr. Johnson settled in Huntsville, Alabama, at the end of an Army career. His 21 years in the Army included... View Obituary & Service Information

The family of Mr. Douglas Allen Johnson created this Life Tributes page to make it easy to share your memories.

Send flowers to the Johnson family.