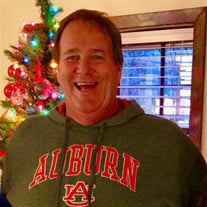 Mr. Dwight Mitchell (Mitch) Copeland, age 58, of Arab, AL, passed away on Sunday, October 13, 2019 at Hospice Family Care of Huntsville. Mitch was born on July 26, 1961 in Marshall County to Frank Dwight Copeland and Teena Copeland. He served in the Alabama National Guard, spent the majority of his career in automotive management, was an avid Auburn football fan, and enjoyed golfing, hunting, and cars. He was a member of Church of Highlands- Auburn Campus and valued every friendship he made throughout his life. Preceded in death by his parents, Mitch is survived by his daughter, Marcy Lynn Copeland of New York, New York, his son, Tate Mitchell Copeland of Auburn, Alabama, and his sister, Kim Copeland Stewart of Guntersville, Alabama; The family would like to acknowledge Mitch’s caregivers at the end of his life, Greg Scofield of Guntersville, Brandy Casey of Arab, and Myria Tidwell of Arab. The visitation will be from 6:00 p.m. to 8:00 p.m. on Thursday, October 17, 2019 at Arab First United Methodist Church. The funeral service will be held at 12:00 p.m. on Friday, October 18, 2019 at Arab First United Methodist Church with Pastor Steve West, Jamey Cosby, and Dr. Greg Driskill officiating. The burial, immediately following the funeral service, will be in Arab Memorial Cemetery with Arab Heritage Memorial Chapel directing. Pallbearers will include: Harold Brownlow, Brian Clayton, Mark Dothard, Mike Harris, Shannon Head, Gary Kennedy, Doug Maze, and Jeff White. The family is accepting flowers and requests donations be made to Hospice Family Care of Huntsville, 801 Clinton Avenue East, Huntsville, Alabama, 35801.

The family of Mr. Dwight Mitchell "Mitch" Copeland created this Life Tributes page to make it easy to share your memories.

Send flowers to the Copeland family.