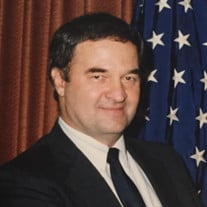 Glenn Osmond McNeal, Jr., 83 of Arab went to be with his Heavenly Father on April 20, 2020 after a courageous three year battle with stage 4 kidney cancer. Glenn was born January 2, 1937, the son of Glenn McNeal Sr. and Berniece McNeal. He was preceded in death by his parents, sister Gayle (McNeal) Garner and first born son Danny McNeal. In 1955, Glenn graduated from Paris High School in Arkansas where he lettered in both football and track. He served in the U.S. Army as an electronics technician and then had a distinguished 35 year career at Redstone Arsenal finishing his career at the Army Materiel Command in supporting both the Hawk and Patriot Missile Foreign Military Sales Programs retiring as a Supervisor/International Program Management Specialist GS-15. He was also an avid outdoorsman who enjoyed camping, hunting and fishing. His semi-professional pursuits included stock car racing in the 1960s against Bobby Allison and others and won two national championships in his age division in the sport of motorcycle trials in the 1980s. In addition, he was inducted to the North American Trials Council and the Southeastern Trials Riders Association ‘Hall of Fame’. Most recently he served as a board member for Marshall County RSVP. He was a faithful member and volunteer of Arab First United Methodist Church and the ‘Class of our Redeemer’ for 58 years. Glenn is best known for his kind and encouraging spirit, generosity and friendship to all he met. His faith was the anchor of his life and time with family brought him so much joy. He is survived by his wife of 63 years Cherie McNeal of Arab; three sons and their families: Michael and his wife, Jane and grandson, Michael, Jr.; Steve and his wife Laura, granddaughter, Raegan and grandsons, Logan and Jacob; Tom and his wife, Kerrie, granddaughters, Caroline, Olivia and Katherine; granddaughter: Amanda (McNeal) Cole and husband Jesse, and great granddaughter, Kaitlin; granddaughter: Tammy (McNeal) Willis and husband Greg, and great granddaughter, Josie and great grandson, Sam; he is also survived by his two brothers and their families: Larry and Judy McNeal and David and Alice McNeal along with many nieces, nephews and dear friends across the country and world. With care and concern for all during the current pandemic, a memorial celebration of Glenn’s life will be announced and held at a later date. Arab Heritage Memorial Chapel, assisting. To honor the memory of Glenn his family has requested that in lieu-of-flowers, donations be made to the Arab First United Methodist Church Building Fund or Shepherd’s Cove Hospice of Albertville who took great care of Glenn in his last days.

Glenn Osmond McNeal, Jr., 83 of Arab went to be with his Heavenly Father on April 20, 2020 after a courageous three year battle with stage 4 kidney cancer. Glenn was born January 2, 1937, the son of Glenn McNeal Sr. and Berniece McNeal. He... View Obituary & Service Information

The family of Mr. Glenn Osmond McNeal Jr. created this Life Tributes page to make it easy to share your memories.

Glenn Osmond McNeal, Jr., 83 of Arab went to be with his Heavenly...

Send flowers to the McNeal family.