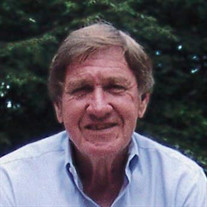 Mr. Howard Mac Gibson, age 87, of Union Grove, passed away on Wednesday, January 1, 2020 at his residence. Mr. Gibson was born on November 8, 1932 to Leon Gibson & Willie King Gibson. He was a man of many trades, he worked as a machinist at... View Obituary & Service Information

The family of Mr. Howard Mac Gibson created this Life Tributes page to make it easy to share your memories.

Send flowers to the Gibson family.