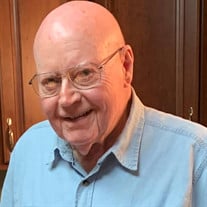 Colonel James Perry (“JP”) Hales III (US Army, Ret) of Arab passed away on Oct 27 from heart failure at the Huntsville Hospital. He was 84 years old. He is survived by his wife of 19 years, Lynn (Carlton-Hoekstra) Hales, his brother William Hales and sister Nancy Zartarian of Raleigh, NC, daughters Laura Hales of Ocala, FL, and Karen Foerster of Graniteville, SC, and granddaughter Emma Ansari of Richmond, VA. His daughters’ mother, the former Norma Welch passed away from lung cancer in 2000 after 43 years of marriage to JP. JP was a generous man who placed a high value on using his life to serve others. After caring for Norma through her 18 month cancer battle; many years later he served his new family by caring for Lynn’s mother, who lived to be 98. In his younger years, JP was a leader of men. He served 28 years in the Infantry branch of the Army, receiving three purple hearts, and several times being decorated for disregarding his own personal safety to save others, including one action in April 1968 when his bravery in combat was recognized for this nation’s second highest award for extreme gallantry and risk of life. He received the Distinguished Service Cross for his action that day and he won the opportunity of a joyous homecoming for many men in his unit who lived to see their families again. JP is remembered as a true renaissance man who was a voracious reader, a fantastic cook, an excellent conversationalist, a devoted husband, a sweet grandfather to two families, and a good friend to so many people. He spoke several languages and served on the board of Brindlee Mountain Nazarene Church in Arab, AL, and will be greatly missed.

Colonel James Perry (&#8220;JP&#8221;) Hales III (US Army, Ret) of Arab passed away on Oct 27 from heart failure at the Huntsville Hospital. He was 84 years old. He is survived by his wife of 19 years, Lynn (Carlton-Hoekstra) Hales, his brother... View Obituary & Service Information

The family of Colonel James "JP" Hales created this Life Tributes page to make it easy to share your memories.

Send flowers to the Hales family.