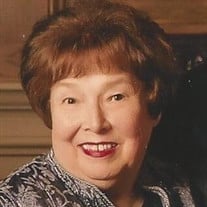 Jane was born in Dayton, Virginia, in 1939, and attended schools in Arlington and Harrisonburg. After attending James Madison University (then Madison College) during 1957-1958, she moved to Washington, D.C., where she worked for the Civil Service Commission (Investigations Division), while attending the Strayer School of Business at night (completed Private Secretarial Course in 1960). She then transferred to The Pentagon where she worked for the Navy Department. She met her husband Bill who was in the Marine Corps at Quantico, Virginia, in 1963; and, two days after their marriage in the Arlington Church of Christ, the couple moved to Alabama. After the birth of their first child, Jane was employed by the U.S. Air Force at Maxwell Air Force Base as a secretary-steno for the Consolidated Base Personnel Office and for Air University Personnel. She later transferred to Gunter Air Force Base, where she worked as an editorial assistant for the Extension Course Institute and as an editor/writer for the Air Force Logistics Management Agency. Highlights of her career were: being involved in the establishment of the Military Affiliate Radio System (MARS), supporting the communications mission during the Cuban Missile Crisis; preparing reports on the Prisoners of War returning from Vietnam; and serving as assistant editor of the Air Force Journal of Logistics, a magazine distributed worldwide. During that tenure, she also edited The Logistics of Waging War and wrote articles for the base newspaper, The Dispatch. Jane was grateful she had the opportunity to serve our country for over 30 years (she received a medal For Outstanding Civilian Service to the Department of the Air Force and later an American Flag that had flown over our Nation's Capitol). After retiring in 1994, she traveled to Israel, Egypt, France, Germany, Ireland and Mexico. Upon moving to Arab in 2008, she and Bill enjoyed exploring the backroads, visiting Guntersville Park, and traveling to neighboring towns. Jane continued her writing interests as a member of the Montgomery Branch, National League of American Pen Women (NLAPW), Huntsville Branch of NLAPW, Montgomery Press and Authors Club, Alabama Writers' Conclave, Women in the Arts (Decatur, IL), and Alabama State Poetry Society. The highlight of being a member of NLAPW was meeting several Alabama Governors who promoted the literary talents of our State and who recognized our Poet Laureates at special ceremonies. She served in various NLAPW branch and state offices from 1984 to the present. During that time, she worked tirelessly to improve the image of Alabama writers by rewriting the state bylaws and by compiling albums of members' newspaper publicity/achievements which she donated to the Alabama Department of History and Archives in Montgomery and the Huntsville-Madison County Public Library for permanent storage. She also designed/published Yearbooks, cards, bookmarks, and programs for the writing organizations. She published a Huntsville Branch Anthology in 2011 which included the biographies of Branch members, along with their poems and art. She won over 100 literary awards thru the years, and her works were published in both state and national publications. Jane’s story of fiction published in Mystery Time was nominated for the prestigious Pushcart Award. She donated some of her works, as well as other authors' books, to several libraries. She was also a photographer and many of her photos were published in Grandmother Earth books. In addition, she won awards in the NLAPW State Art Competitions. She also learned to play the piano at a young age. She was a Rosebud in the Rosie the Riveter organization, having written about her mother and mother-in-law and their contributions during World War II. In addition, she assisted friends in registering for inclusion in the World War II Memorial in Washington, D.C., and was certified as a Lifetime Charter Member of the World War II Memorial Society. She wanted to be remembered for contributing to the awareness and writing ofgood literature. She hoped her works brought joy, beauty, and humor into the lives of her readers. She wrote a love poem to Bill every Valentine’s Day throughout their many years of marriage. Jane also was a “guinea pig” for medical Botox in the late 1980s, paving the way for relief for those who would suffer with muscle spasms. She was a member of the Mt. Hebron Church of Christ in Eclectic from 1972 to 2008 where she published the weekly bulletin, calendar, and directory for many years. She also taught Bible classes and helped in different capacities with Vacation Bible School. She wrote a short history of the Mt. Hebron Church which was included in the directory. After moving to Arab in March 2008, Jane and Bill became members of the Arab Church of Christ. Jane continued sending out cards to members who were sick and to families who had lost loved ones. She hoped this act would comfort members. Jane wanted to be remembered for faithfully serving the Lord during her lifetime and for being a Christian wife, mother, and grandmother. She was always in her glory when the whole family gathered at their house to partake of delicious food and engage in enlightening conversations. Surviving Mrs. Allen is her beloved husband, William Thomas; children, Andrea (Tom) Weathington, William Bryant (Kristin) Allen and Lori (Frank) Tatom; grandchildren, William and Harrison Weathington, Ben and Maggie Tatom, Riley and Reese Allen; brothers, Garland Shull as well as sister, Yvonne Fulk. In addition to her parents; Mrs. Allen is at last reunited with her brothers, Gary Shull and Jimmy Shull. A Graveside Service will be held on Monday - January 4, 2021 at the Antioch Church of Christ Cemetery in Troy, Alabama beginning at 3:00 p.m. with Bro. Ken Tyler, officiating. Pallbearers escorting Mrs. Allen to her final resting place will be; Bryant Allen, William Weathington, Harrison Weathington, Tom Weathington, Frank Tatom and Ben Tatom In Lieu of Flowers, The family of Mrs. Allen has requested that donations be made to Child Haven in Cullman, Alabama. Arab Heritage Memorial Chapel, directing and assisting the Allen Family.

Jane was born in Dayton, Virginia, in 1939, and attended schools in Arlington and Harrisonburg. After attending James Madison University (then Madison College) during 1957-1958, she moved to Washington, D.C., where she worked for the Civil... View Obituary & Service Information

The family of Mrs. Jane Elizabeth Allen created this Life Tributes page to make it easy to share your memories.

Jane was born in Dayton, Virginia, in 1939, and attended schools...

Send flowers to the Allen family.