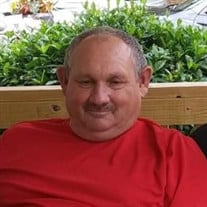 Mr. Jerry Adams, age 63, of Joppa, passed away on September 27, 2021 at Marshall Medical Center North. Mr. Adams was born in Madison County, Alabama on November 9, 1957 to the late Shelvie and Dorothy Adams. Mr. Adams served his country in the... View Obituary & Service Information

The family of Mr. Jerry Adams created this Life Tributes page to make it easy to share your memories.

Send flowers to the Adams family.