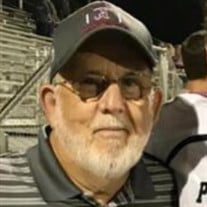 On the evening of Saturday - February 13, 2021; Mr. Jimmy Dale LaRue passed away at Marshall Medical Center North at the age of 77 years. Mr. LaRue was born on August 26, 1943 in Guntersville, Alabama to the late A.B. LaRue and Dovie Plunket... View Obituary & Service Information

The family of Mr. Jimmy Dale LaRue created this Life Tributes page to make it easy to share your memories.

Send flowers to the LaRue family.