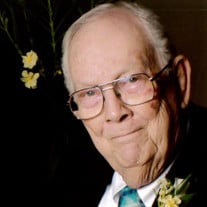 John Havard Biggs, Sr. of Arab, Alabama passed away suddenly at his home on Tuesday, August 4, 2020. He was 91 years old. Mr. Biggs was the son of Elbert E. Biggs and Willie Havard Biggs, and born September 30,1928 in Clark County, Alabama. He grew up in Mobile, Alabama. He attended Murphy High School and later took college courses through the University of Alabama Extension Center. Mr. Biggs was a proud veteran of World War II and the Korean War, having served in the Army Air Corps and the United States Army (as a Ranger). Later he worked as a civilian employee of the Army at Redstone Arsenal. When he returned from the Korean War, he met and married his beloved wife of 63 years, Memory Watts Biggs. Throughout his life, he was active in fitness and athletics, first in school sports, then as a boxer, bicyclist and runner. He enjoyed participating in competitive running and triathlon events. In his middle years and into his seventies, he enjoyed hiking, rappelling and rock climbing. Until the Covid-19 pandemic, he still worked out at the gym several times weekly, when he was able. Generations of Arab High School athletes, as well as his own grandchildren, will remember him cheering them from the sidelines both at games and practices. He was also a huge fan and loved Alabama football. He was a Scottish Rite Mason. Mr. Biggs became a Christian at a young age and, when he moved to Arab in 1965, he immediately joined the Arab First Baptist Church. There he served as a Deacon, Sunday School teacher and VBS volunteer for many years. He always enjoyed teaching and encouraging children and youth, but his greatest pride was his family. He is survived by his daughter, Carol B. Watkins (John); and his son, John H. Biggs, Jr. (Sharon); his grandchildren, Matthew S. Shipp (JoAnna), Nathan M. Shipp (Bonnie), Eric S. Watkins (Jodi), Adam C. Watkins, Jennifer A. Watkins, and John H. Biggs, III; his great-grandchildren, Natasha, Colin, Xander, Caleb, A.J. and Braeden. In addition to his parents and wife, he was predeceased by his sister, Doris B. Megginson. Visitation in honor of Mr. Biggs will take place on Monday, August 10, 2020 from 11:00 am-1:00 pm at the Arab Heritage Memorial Chapel. Funeral services will be held on August 10, 2020 at 1:00 pm with Dr. Clint Landry and Dr. David Kizziah officiating. Interment will be in the Arab Memorial Cemetery. Pallbearers escorting Mr. Biggs to his final resting place will include: Matthew S. Shipp, Nathan M. Shipp, Eric S. Watkins, Jennifer A. Watkins, John H. Biggs III and Adam C. Watkins. Arab Heritage Memorial Chapel, Directing.

John Havard Biggs, Sr. of Arab, Alabama passed away suddenly at his home on Tuesday, August 4, 2020. He was 91 years old. Mr. Biggs was the son of Elbert E. Biggs and Willie Havard Biggs, and born September 30,1928 in Clark County,... View Obituary & Service Information

The family of Mr. John Havard Biggs Sr. created this Life Tributes page to make it easy to share your memories.

Send flowers to the Biggs family.