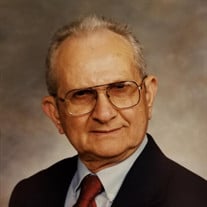 After a brief stay at Marshall Medical Center North, Kenneth Adrian Dodd was welcomed into the Kingdom of Heaven on Sunday, December 13, 2020 at age 93. Kenneth Dodd was born on September 27, 1927, in Scant City, Alabama. He was the seventh of eight children born to Norwood Dodd and Fannie Lou East Dodd. Dodd also had half-brothers and sisters born in Georgia to Norwood Dodd and his first wife, Vera Thompson Dodd. Kenneth served in the U. S. Army and was honorably discharged in 1947. Under the GI Bill he attended Snead State Jr. College from 1949 until 1950, and the Alabama Polytechnic Institute (Auburn) from 1950 to 1951, before graduating from Athens College in 1958 after attending from 1955 to 1958. Kenneth was married to Estel Mullinax Dodd for forty-five years. They were members of the Arab First Baptist Church, where Estel sang in the choir and Kenneth served for a time as a deacon. Kenneth was also very interested in the Boy Scouts of America, and served for several years on the Board of Review for Arab's Troop 60. Kenneth Dodd worked for the Army Ballistic Missile Agency prior to the establishment of NASA and the Marshall Space Flight Center, where he worked for over thirty-five years as an electronics technician and was involved in the testing of the Saturn V F-1 engines and other components related to NASA's Apollo program. After retiring from NASA, he worked for several years as a contractor with Computer Sciences Corporation and Boeing. Kenneth is survived by sons Stephen Dodd of Montgomery and David Dodd of Lewisburg, TN, and sons Bennett Dodd and Barry Dodd, grandson Kyle Dodd, granddaughter Alyssa Dodd, and great grandson River Dodd, all of Huntsville. He is also survived by many nieces and nephews. Kenneth was preceded in death by his wife Estel Dodd, infant son John Mark Dodd, and friend in later life Blair Herren of Arab. He was also preceded in death by all his brothers and sisters – brother Norwood Dodd, Jr., sisters Gertrude Dodd Hawk, Lovell Dodd Stone, Marjorie Dodd Buchanan, Mary Nell Dodd Graves, Eris Dodd Thornton, and Joyce Dodd Martin, half-brothers Zolon Clifford Dodd and Norman Guy Dodd, and half-sisters Clarice Dodd Leak and Frankie Dodd Etchison. Kenneth will be buried on Friday, December 18, 2020. A visitation will take place at Arab Heritage Memorial Chapel on Friday, December 18, 2020 from 12:30 to 1:30 pm, followed by a graveside service and internment at the Arab Cemetery at 2:00 pm. Brother Alan Roggli, Senior Pastor of the Carol's Creek Baptist Church in Northport, AL, will officiate. Stephen Dodd, David Dodd, Bennett Dodd, Barry Dodd, Kyle Dodd, and Larry Brantley will serve as pallbearers. Arab Heritage Memorial Chapel will be directing the services on December 18, 2020. In lieu of flowers, the family encourages contributions to the Alzheimer's Association, 225 N. Michigan Ave., Floor 17, Chicago, IL 60601, or the U.S. Space and Rocket Center Education Foundation, 1 Tranquility Base, Huntsville, AL 35805. Friends and family are encouraged to take for themselves all possible Covid-19 precautions, both at the funeral home and at the graveside. Protective face masks will be required for entry into the funeral home. It is the expressed wishes of the family that no one endanger themselves while attending Kenneth Dodd's services.

After a brief stay at Marshall Medical Center North, Kenneth Adrian Dodd was welcomed into the Kingdom of Heaven on Sunday, December 13, 2020 at age 93. Kenneth Dodd was born on September 27, 1927, in Scant City, Alabama. He was the seventh... View Obituary & Service Information

The family of Mr. Kenneth Adrian Dodd created this Life Tributes page to make it easy to share your memories.

After a brief stay at Marshall Medical Center North, Kenneth...

Send flowers to the Dodd family.