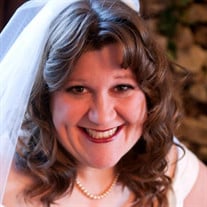 It is with heavy hearts that we announce that Michelle Lucy Bishop, 45, of Huntsville, passed away Wednesday, June 16th. Michelle was born October 19th, 1975 in Queens, New York, to Dominic and Stephanie Monticciolo. After stops in Florida, Michelle’s family, which had added a sister, Lisa, settled in Mobile, Al where she graduated from Baker High School in 1994, not having read one assigned book and being more than proficient at FHA She spent her life wearing many hats, from homemaker, to an arts and crafts small business owner, to a restauranteur, to a nutritionist. In 2010, she gave those up to take care of her mom who was involved in the school shooting at University of Alabama Huntsville. While taking care of her mom in 2011, she met Matthew Bishop buying a cell phone and married him in January of 2012, proving further that you can truly find anything at Walmart. In May 2013 she gave birth to the light and joy of her life, Samuel, where she spent the rest of her time on this earth being what she was meant to be: a mom. She is survived by: her husband, Matthew, her son, Samuel, her mother Stephanie, her sister, Lisa Tate, her brother-in-law, Ryan Tate, her father, Dominic, her stepmother Joella, her stepsister Joleigh, and two cats, Sydney and George. Michelle is preceded in death by her maternal grandparents, Armand and Victoria Prete; paternal grandparents, John and Susan Monticciolo; great father and mother in law, Cassel and Alice Bucfley; great father in law, James Bishop. Michelle’s graveside service will be at 11 a.m. Wednesday, June 23rd, at Gilliam Springs Cemetery. In lieu of flowers, think about making a donation to Manna House in Huntsville, or to your local hospice association, or at the very least, read or watch Anne of Green Gables and be glad that we live in a world where there are Octobers. Arab Heritage Memorial Chapel, assisting the family.

It is with heavy hearts that we announce that Michelle Lucy Bishop, 45, of Huntsville, passed away Wednesday, June 16th. Michelle was born October 19th, 1975 in Queens, New York, to Dominic and Stephanie Monticciolo. After stops in Florida,... View Obituary & Service Information

The family of Mrs. Michelle Lucy Bishop created this Life Tributes page to make it easy to share your memories.

It is with heavy hearts that we announce that Michelle Lucy Bishop,...

Send flowers to the Bishop family.