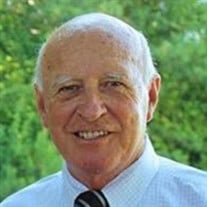 Perry Montgomery Yancey September 30, 1940 – May 25, 2021 For almost sixty years, Perry Yancey, together with his wife, Mary Sue, nurtured their family with love, compassion and a steadfast faith in Christ. Perry passed away on May 25, 2021, leaving Mary Sue to carry on their tradition of caring and sharing God’s love with their children, grandchildren, extended family and friends. Perry was the third of six children born to Mary Leaton Wells Yancey and James Walter (“Waltz”) Yancey. He grew up on the family farm in Morgan City and graduated from Arab High School in 1958. Among his siblings, he is survived by his brother Murray W. “Pete” Yancey (Evelyn) and sister Janice Barclift (James Riley). His brothers Gilbert Reed Yancey and Donald Ralph Yancey, and his sister Sherry Jane Light predeceased him. After high school, Perry’s early career began at Brown Engineering in Huntsville where he was particularly happy to have been a small part of the Saturn V project team that put the first person on the moon. He carried that spirit of collaboration with him throughout his career as he worked later in management and quality control in the telecommunication hardware industry—a career that took him around the globe. Where ever his work life carried him, his focus remained firmly fixed on his family which began in 1962 when he and Mary Sue Bodine married in Arab. After a brief time living in Huntsville, the couple moved back to Arab where they built thehouse they would call home for the next 58 years. Perry and Mary Sue’s marriage was a beautiful union and partnership that will provide continuous inspiration to all those whose lives they have touched. Together they had four children: Sherry Gail McMahone (Marty), Anita Ruth Yancey, Perry Michael Yancey (Mary) and John David Yancey (Jamie). Anita died at age 5 in 1970 from leukemia. The three other children ultimately started their own families and settled in Texas, Birmingham and Florida (respectively). The first grandchild was born in 1992, and from that point forward Perry and Mary Sueembarked on a constant campaign of love and affection, to such a degree that none of the grandchildren would ever have reason to doubt that they were loved wholly and completely. Eva, Walker, Hope, Jack, Emma, Watts and Grayson all will attest, the Grandparents’ mission has been a success. Granddaddy Perry also took great pleasure in making sure there was no shortage of fun—for both the kids and himself. He loved playing games of all sorts with them: cards, ping pong, pool, baseball, football, and even snow sledding. When grandchildren were in his company his smile never faded, his eyes were bright and laughter was a constant. Although he often accused the kids of “sounding like they were having too much fun,” everyone knew he was the cause of it. In addition to their own children, Perry and Mary Sue embraced a whole host of nieces and nephews, always with love and encouragement. Beyond his immediate family, Perry loved his Arab First Baptist Church family that he and Mary Sue had been part of it most of their married life. There, Perry served as a deacon for over 50 years, while also teaching Sunday School, leading youth groups, and participating in Bible studies. He often served as an usher and welcomed countless folks to the Church with his warm smile, a gleam in his eyes and possibly a joke he had told once or twice before. Whatever his role at Church, Perry was there with a humble spirit, an open heart and an undying love of Jesus Christ. While faith and family truly were his passion, his guilty pleasure was the game of golf. He began playing as a very young man and never stopped. Throughout his retirement, he played regularly at Gunter’s Landing and other courses near and far. At home, he practiced routinely, hitting balls in the pasture and on the chipping greens he constructed in the yard. While he recorded three hole-in-ones over the years, he counted the friends he made on the course as his best score. A memorial service will be held at Arab First Baptist Church on Thursday, May 27th at 2:00pm, Dr. Clint Landry and Pastor David Kizziah officiating. Deacons of the Church and their spouses are honorary pallbearers. Immediately following the service there will be a reception and celebration of Perry’s life at the Church. In lieu of flowers, donations may be made to St. Jude Children’s Research Hospital (stjude.org/donate) or to the charity of your choice.

Perry Montgomery Yancey September 30, 1940 &#8211; May 25, 2021 For almost sixty years, Perry Yancey, together with his wife, Mary Sue, nurtured their family with love, compassion and a steadfast faith in Christ. Perry passed away on May 25,... View Obituary & Service Information

The family of Mr. Perry Montgomery Yancey created this Life Tributes page to make it easy to share your memories.

Send flowers to the Yancey family.