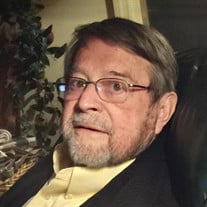 Claud Burke, 78, of Arab, Alabama, passed away Saturday, May 1, 2021, at his home. Burke was born in Birmingham, Alabama, on March 25, 1943, to Marjorie Fuller Burke and Claud Liles Burke, both deceased. He had one sister, Bobbie Joan Burke who predeceased him. He is survived by Sharon Barron Burke, his devoted wife of nearly 32 years, and she was unwavering in her love and care for him. He was educated in the Cullman schools and graduated from The University of Alabama in 1965 with a degree from the School of Arts and Sciences. During this time he served honorably in the United States Air Force Reserve from 1963-1968. Claud received his law degree from The University of Alabama School of Law in 1968 and then clerked for Madison County Circuit Judge David Archer from 1968-1969. He had originally intended to return to his hometown of Cullman to practice law, but at the urging of Arab Mayor Ralph Hammond and many others, he opened a law practice in Arab in 1969. Over the next 50 years he represented businesses and individuals in the state and federal courts, and also served as Arab's City Attorney and City Prosecutor, and as attorney for the Arab City School Board, Arab Electric Cooperative, Arab Water Board, and Arab Sewer Board. He was always grateful to the City of Arab and its citizens, whom he said had given him so much. Burke also had a big heart and found it hard to turn anyone down who needed legal help, whether they could pay for his services or not. If a list was made of everyone that he represented who could not pay him, the names would spill over many pages. He retired from the active practice of law in 2019. Claud was an ardent promoter of the City of Arab, Alabama, leading at various times the Arab Chamber of Commerce and the Jaycees as well as serving on the Marshall County Economic Development Board and the United Way Board. He was instrumental in convincing the Arab City Council to form the first Arab Industrial Development Board and took the lead, along with several others, in recruiting much of the manufacturing industry that Arab has today. He and his wife Sharon were steadfast supporters of the Arab City Schools and the Arab City Schools Foundation. In 2014 he was named Arab Citizen of the Year by the Arab Chamber of Commerce. Burke is survived by his wife Sharon Barron Burke; his children Judge Liles Burke (Natalie) and Ashley Spethman (Milo) of Arab, AL; and his stepchildren Shala Murray (Coy) of Guntersville, AL and Lowell Ray Barron II (Didi), of Section, AL.He is also survived by ten grandchildren, Austin and Alex Murray;Mary Margaret, Madeline, and Milo (Jr.) Spethman;Camilla Jane and Claud Liles Burke II; and Kennedy, Claudia, and Campbell Barron. A private graveside service will be held on Monday, May 3, 2021 at the Arab Memorial Cemetery. In lieu of flowers, the family is requesting donations be made to the charity of your choice. ARAB HERITAGE MEMORIAL CHAPEL, ASSITED FAMILY

Claud Burke, 78, of Arab, Alabama, passed away Saturday, May 1, 2021, at his home. Burke was born in Birmingham, Alabama, on March 25, 1943, to Marjorie Fuller Burke and Claud Liles Burke, both deceased. He had one sister, Bobbie Joan Burke... View Obituary & Service Information

The family of Mr. Robert Claud Burke created this Life Tributes page to make it easy to share your memories.

Send flowers to the Burke family.