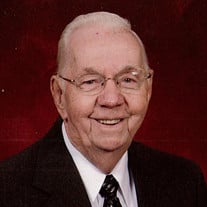 Mr. Wilburn E. “Bunk” Bynum, age 93, of Arab, passed away on Sunday, April 12, 2020 at Marshall Medical Center North. Mr. Bynum was born on December 25, 1926 in Gadsden to J.V. and Mamie Bynum of Gadsden, Alabama. He attended Gadsden High School, Snead College, Auburn University and the University of Alabama Center in Gadsden. He was a veteran of World War II, serving as an Aviation Radioman in the U.S. Navy. He and his wife moved to Macon, Georgia in 1976, retiring as a Branch Manager with the U.S. Office of Personnel Management Computer Center in 1989. He loved working with computers of all levels during his career in data processing. He represented the Army Missile Command, Computers Science Corporation and The U.S. Office of Personnel Management speaking at various seminars throughout the United States and parts of Canada. He was a member of First Baptist Church and the Senior Couples class. He married Ann Knight Bynum of Gadsden on August 21, 1948 and they had one son. They returned to Arab in 2003 to be near their grandchildren and great grandchildren. He was an avid golfer and was instrumental in the planning and construction of the former Arab Country Club, now Brookside Golf Course. He enjoyed traveling with various senior tour organizations to various parts of his beloved America. In addition to his parents he is preceded in death by his sister; Nellie Ruth Hughes; son, Richard Bynum. Mr. Bynum is survived by his wife of 71 years, Ann E. Knight Bynum; granddaughter, Bronwyn Poole (Scott); grandson, Brandon Bynum; great grandchildren, Carson, Kelsey and Zoey Poole; nephew, Kenneth Hughes of North Carolina. Private services will be held for the family with burial at Crestwood Cemetery in Gadsden, Al with a celebration of life to be announced at a later date. Arab Heritage Memorial Chapel, directing. In lieu of flowers, the family request donations to be made to the Arab First Baptist Church.

The family of Mr. Wilburn Earl Bynum created this Life Tributes page to make it easy to share your memories.

Send flowers to the Bynum family.