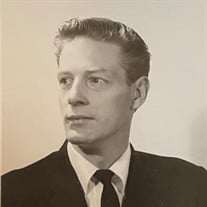 William Henry Tennyson, Jr. passed away peacefully, surrounded by family, at his home in Pottsboro, TX on February 26, 2021. William was born to William Henry Tennyson, Sr. and Ada Lizzy Yeager Tennyson in Cullman, Alabama on July 28, 1933.He had 3 sisters, 2 brothers, 2 half-brothers and 1 half-sister. William was a man known by many names. He was “Bobby” to his family in Alabama, “Willie Bill” to his racing buddies, “Pop Pop” to his grandchildren, “Pop” to his son, “Daddy” to his daughter and “Bill” to everyone else. His life was full of adventure. He used to say, “You have to know you can do it!” and he definitely knew he could do just about anything. After his father passed, he hitchhiked to Fort Lauderdale, FL in his teens to live with his older brother Orvel and attended Florida Southern College. His love for boating began when he sailed with his dear friend Reed Whitney. One of his favorite stories he loved to tell was of the time he and Reed sailed the Atlantic Ocean all the way from the East Coast of Florida to Cape Cod in Nantucket, MA in Reed’s sailboat Little Yankee. At the age of 20, Bill served his country as a paratrooper in the 508th Airborne Regimental Combat Team in the United States Army for 3 years. He was very proud to be a veteran. In the years after the leaving the Army, he was a student at the University of the Americas and a bull fighter in Mexico, an actor in New York City and an SCCA racecar driver in Texas. He always used to say, “No matter where you go, no matter where you live, people are just people.” In the last 52 years of his life in Texas, Bill kept himself very busy. He spent weekends racing or working on his cars, building and restoring furniture, fishing and camping on Lake Texoma, and driving to “Hot-lanta” or “Ala-cotton pickin’-bama” to see his family. Because he couldn’t sit still after he retired from his sales career, he got a part time job driving for Enterprise Rent-A-Car. Neighbors loved to chat with Bill when he was outside trimming the hedges and mowing the grass. Bill had a sentimental side. He kept letters and proudly displayed pictures of his family and plaques from SCCA races on the walls of his home. He kept drawers full of racing t-shirts as souvenirs. He was his son James’ biggest fan at his motocross races, traveled to Atlanta to see his granddaughter Madeline in Beauty and the Beast and loved to cheer on Sammy, Lane and Robby at their soccer games. He was always a rock for his daughter Lisa when she needed advice on how to navigate life. He was a big flirt, had a great sense of humor and loved to entertain. “Come have a cup of coffee” was an invitation always out there and when you came to his house to visit, he’d invite you to have a seat and “Smoke ‘em if you got ‘em”. He called his wine “Vino” and “Salud” was the toast to begin every family meal. Now we say “Salud” to you, Bill. May you rest in peace. William was preceded in death by his parents William “Pate” Henry Tennyson, Sr. and Ada Lizzy Yeager Tennyson, sisters Thelma Frances Bright Barmby and Dorothy “Dot” Nell Mabrey, brothers William Elmer Tennyson, Orvel “Buddy” Lee Tennyson and Raymond “Ray” Wallace Tennyson, half-siblings Clifford Leon Tennyson, James Hershel Tennyson, Ressie Alice Corene Tennyson and nieces Polly Whisenant, Betty Green and Deborah Tennyson Howard. William is survived by his daughter and son-in-law Lisa Marie Tennyson Black and David, son and daughter-in-law James Whitney Tennyson and Dana, former-wife Janice “Jan” Lowery Tennyson, granddaughters Madeline Claire Black and Samantha Reese Tennyson, grandsons Lane Riley Tennyson and Robert William Tennyson, sister Betty Sue Cox, nephews Raymond “RayRay” Tennyson, Jr., Jimmy Dale Bennefield, Wayne Bright, Gary Mabrey, David Mabrey, nephew Phillip Mabrey and nieces Judy Tennyson Greeningand Pat Witson. A graveside service will be held at New Home Cemetery, 610 County Road 1753, Holly Pond, AL on Monday, March 8, 2021 at 2:00p.m. A visitation will precede the graveside service from 12:30 to 1:30 p.m. at Arab Heritage Memorial Chapel • Funeral Home, 1340 North Main Street, Arab, AL 35016. In lieu of flowers, please consider a donation to the Alzheimer’s Association.

The family of Mr. William Henry Tennyson Jr. created this Life Tributes page to make it easy to share your memories.

Send flowers to the Tennyson family.